In our last post we showed the two stamps below and indicated the one was a forgery.  The one on the left is the original and the other the forgery.

Here are some of the differences that we were able to come up with.  There are numerous others but, we thought these allowed for quick identification.  Take a look and have fun! 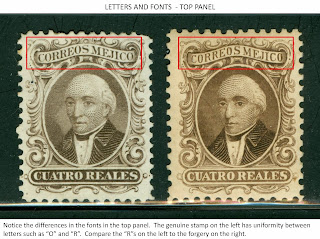 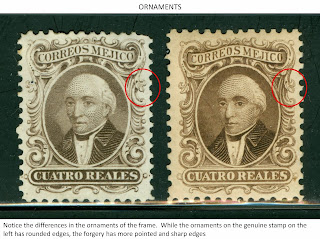 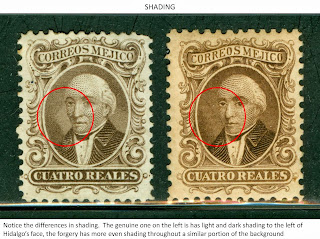 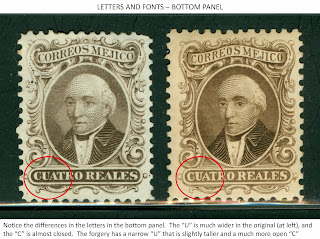 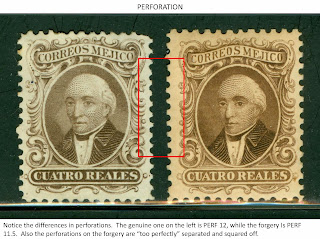 Posted by OquistStamps at 4:05 AM No comments:

While putting together some Mexico listings this past week I came across a grouping of relatively common issues from 1864, depicting Hidalgo... often called the "Juarez Issue".  It is a handsome series, engraved, and perforated 12.  The vast majority exist unused and without overprints and are thus relatively inexpensive.  There are numerous forged cancellations.  What caught my eye though, as I was putting together the lots, was that one of them "didn't look right." Pictured below are two 4 Real Brown side by side.  See how many differences you can come up with.  First, figure out which one is the genuine and which is the forgery.

I will be posting the differences I found between them at the end of the week.

CLICK ON THE IMAGE FOR A FULL SCREEN VIEW

Posted by OquistStamps at 4:06 AM No comments: